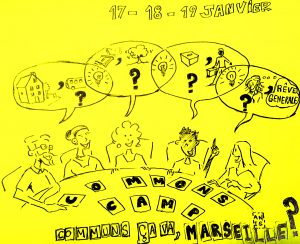 At femProcomuns we are co-organising Commons Camp, a series of co-learning meetings and contributions to the commons open to all. The next meeting will be held in Marseille from 17 to 19 January 2020.

During the preparatory meeting for the FSMET last April, the idea of holding several meetings on the road to the June FSMET came up. This idea, thanks to the energy of many people and to the union with other proposals – which emerged before, after and in parallel-, has given rise to the 2020 Commons Camp meetings.

The first will be in Marseille (France) from 17 to 19 January, the second in Naples in April, in Montreuil in June and then also in Barcelona in June, coinciding with the WSFET. The Commons Camp aims to help create the conditions for the concrete progress of the pro-common movement in Europe and beyond.

COMMONS CAMP MARSEILLE JANUARY 2020
The Marseille meeting aims to support, organize and strengthen local struggles and commoning initiatives as well as the articulation of the commons movement in Europe. The Commonscamp will be the launching moment of the assembly of the self-managed places of Marseille (as an assembly of the commons) facilitated by Art-Factories / Autre Part. It also offers the opportunity to link and exchange experiences between activists involved in different disciplines and fields such as artists, educators, social economy, urban planning, lawyers, etc. We open the stage to volunteer artists for contributions and performances from Marseille, Grenoble, Naples, …

We want this meeting to bring together all kinds of activists interested in the commons, whether they are beginners or specialists, and also to help advance the work, develop tools that the commons movement needs to consolidate itself and be useful to our struggles and get the commons recognised.

You will find more information on the page explaining our involvement and more details about the project: https://femprocomuns.coop/commons-camp/