“…amidst so much destruction, another world is growing, just as grass grows between the cracks in the urban pavement, challenging the hegemony of capital and the state and affirming our interdependence and our capacity to cooperate”.
Federici, Silvia (2020) Re-enchanting the world. Feminism and the politics of the commons 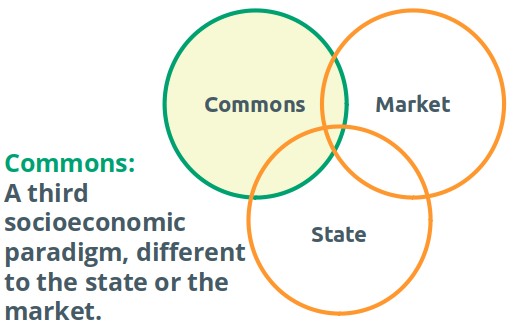 Alongside the market and the state, there is a third model of social and economic organisation, the commons. In addition to the numerous cases of traditional commons production, reproduction and management that have been sustained over the years, technological, urban and cultural projects, some of which use free and open licences, with distributed and democratic models of production, reproduction, management and decision-making, have been launched in recent decades. These projects are different from each other, but share certain principles and qualities.

The commons is a model of social organisation that resolves needs and social relations collectively through self-management and co-production, appropriating the necessary material and immaterial resources sustainably, without depleting them or putting them at risk. A commons implies the articulation of a community that takes joint responsibilities and decisions, that produces collectively with its labour force, that provides itself with agreed rules and, when necessary, with shared goods.

It is increasingly clear to more and more people that the model based on maximising private profit has failed, that it is unviable and unsustainable for society and for the planet. This model, which still prevails, is leading us into a social crisis and an unprecedented climate emergency. Faced with this situation, we find in the commons model a way to reorganise ourselves in order to articulate sustainable alternatives. A model that can be complementary to other models of democratic organisation, ecological sustainability and solidarity economy.

Forms of commons are very old in human societies, appearing in different situations and, especially, in situations of emergency or catastrophe. Some traditional commons were eradicated in Europe in the 18th and 19th centuries with the closing of fields or the “amortización” (disentailments) in Spain, giving rise to capitalist accumulation and the industrial revolution. The eradication or marginalisation of the commons was widespread in the new territories colonised by the emerging European empires and states. The response was manifold: resistance conflicts to defend the threatened commons, resistance to colonisation and slavery, and the response of proletarianised peasants (in some cases former commoners or their descendants) through workers’ associations and cooperativism. This process is not over, models of commons self-management are, even now, being closed down or privatised through mining, agricultural deforestation or technological giants. But the commons, resources and processes (collective wealth, nature, civil infrastructure, cultural works, traditions, knowledge, …), are present in our environment, and to preserve them (from a social and environmental perspective), today we can also look for answers in the self-organisation of people, in associationism and in the revitalisation and reinvention of cooperativism, such as that proposed by open cooperativism.

Environmentalism has taught us the importance of interconnected ecosystems, it has challenged the anthropocentric imaginary by placing the human species as just another species, which at the same time has a responsibility for its impact. The commons approach emphasises stewardship rather than ownership and the importance of sustainability in passing on resources and the ecological environment to future generations.

The emergence of commons models has been identified in free software (Linux, LibreOffice, etc.) and also in other initiatives, for example the Zaatari refugee camp in Jordan or the Guifi.net community internet network, the sharing of seeds in India, the protection of potato species with genetic value in Peru (Potato Park) or CouchSurfing (offering to sleep on a sofa to travellers).

“Let’s be clear: the commons is not a utopian fantasy. It is something that is happening right now. We can see it in countless towns and cities, in the global South and the industrial North, in open source software communities and in worldwide cyber networks”.
Helfrich, Silke; Bollier, David (2020) Free, fair and alive: el poder subversivo de los comunes

But the principles of the commons begin at home, the domestic sphere is the main space for social reproduction and its sustainability.

And in this sense there is a confluence between the commons model and feminism, which reinterprets and transforms it, highlighting the importance of reproductive work that is invisible in the market model, where any form of work that cannot be transacted, however necessary it may be, is not considered. The feminist perspective makes visible everything that makes the sustainability of a community project possible.

“Commoning begins in the family. The kitchen, where production and reproduction meet and the energies of the day are negotiated between genders and between generations. It is where transcendental decisions are made for the first time in the distribution of tasks, in the distribution of products, in the creation of desire and in the maintenance of health”.
Linebaugh, Peter (2010) Some Principles of the Commons. Counterpunch

In order to work on the sustainability of commons projects, over the last few years we have developed a model that aims to be a working tool for collectives that want to articulate solutions to community challenges.

A sustainability model is a modelled definition of how a project works or is proposed to work. Key elements are: the value proposition – products or services -, what is done, for which user profiles, how resources are mobilised, the organisational and financing model and other elements oriented to the sustainability of the project.

The 5 pillar model of sustainability has been defined to work on these aspects in initiatives and projects that solve needs or articulate social relations based on self-organisation, self-production, collaboration and collective self-management. They can be projects for the self-sufficiency of resources and services, the collective management of common goods, the organisation of social relations or the collaborative production of material or immaterial goods that are made openly available to those who need them.

It is a conceptual model that considers 5 interconnected dimensions in a commons project. The model uses a visual scheme that helps us to situate these relationships, and different variants of the scheme are used for more depth. 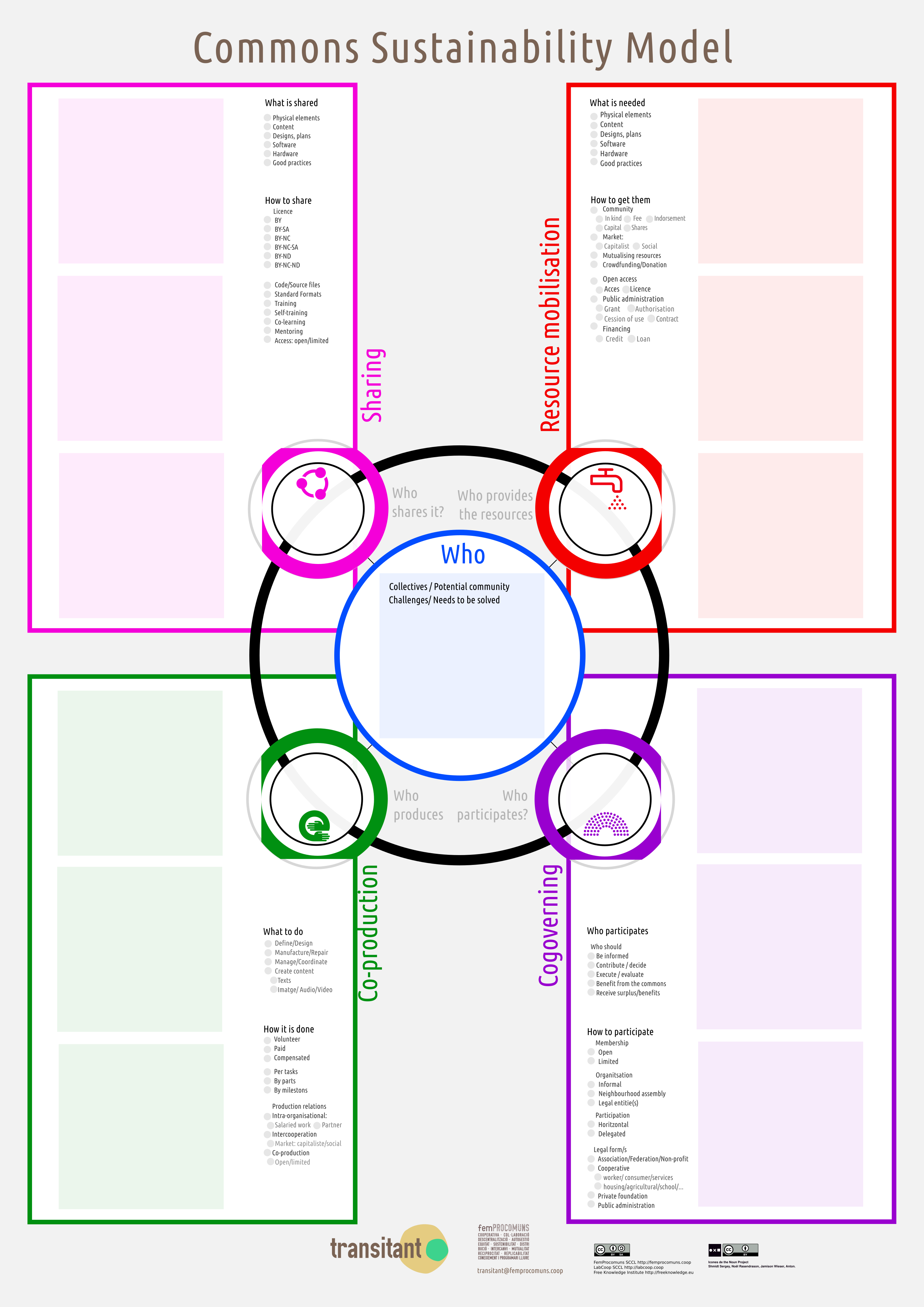 For a commons project to be sustainable, a solution must be found that maintains the fragile balance between the motivations of the different participants: the challenge lies in federating initiatives and finding the right amount of social mass, the motivation of a diverse group of people who self-govern, use, manage and contribute (in the p2p production and/or intercooperation model) to important parts of the project, with a common vision, mission and values and with an aligned knowledge sharing policy. Thus, a balance between the five pillars must be ensured.

Community pillar. At the heart of the 5 Pillars model is the community of people who produce, care for, and use a particular commons that they share. It is articulated through mechanisms, tools and rules that regulate its functioning. Social, Solidarity, Cooperative Economy (SSCE) projects and digital, urban or knowledge commons often involve large and diverse communities. They depend on processes in which participation is key, they propose models of distributed governance and the people who participate in them want to influence their environment, consciously and collectively. Communication, deliberation and decision-making are significant factors to consider.

Pillar of resources to be mobilised. This deals with the mobilisation of resources necessary for the existence of the project, material or immaterial, which are not labour force. They can be provided by members of the community articulated around the project, or come from outside it. This can occur according to different models of economic relations (free disposal, donation, loan, exchange, inter-cooperation, social market, capitalist market). They can be natural resources, monetary, financial, disused materials that are reintegrated into the economic circuit, written or audiovisual content, computer software, among others. And, of course, they can serve to remunerate and/or compensate the workforce.

Co-production Pillar. It focuses on the workforce, the production relations that are established, how production is organised and the motivations of the people involved. It speaks of collective self-production: production is done within a community by its own members, to solve their own needs and challenges. Furthermore, it is necessary to understand which individuals, collectives and organisations make up this community and how they relate to each other; whether part of this production is done outside the community or in other communities with which relationships are established, and whether the production responds only to one’s own needs or whether it is done in the open and everyone can benefit from it. It looks at all the human labour force, paid or voluntary, that needs to be mobilised, coordinated and put into collaboration.

Co-governance pillar. Identifies the societal tools and mechanisms available to enable the participation of the project’s promoter, executor and/or target community in decision-making in a horizontal, democratic and distributed manner. What are the policies for joining a project, how to become a member of the community or entity, how to mobilise the necessary resources, what return and profitability commitments there are, and how to agree and execute the distribution of the value generated among the contributors.

Sharing pillar. How to share knowledge, skills and even immaterial or material production can be key for a commons project to be sustainably reproduced and also to be replicated or adapted. It is concerned with having mechanisms for communicating within the community how things are done (documentation, internal training, shared learning); open sharing through public licences, publication of source files, open data and collaboration with replication.

Model of the 5 pillars of sustainability of the commons (in catalan) by Wouter Tebbens, David Gómez and Mònica Garriga (translated into English): Chapter XVIII Sharing Cities . Dimmons Research Group. 2019

Linebaugh, Peter (2010) Some Principles of the Commons. Counterpunch. 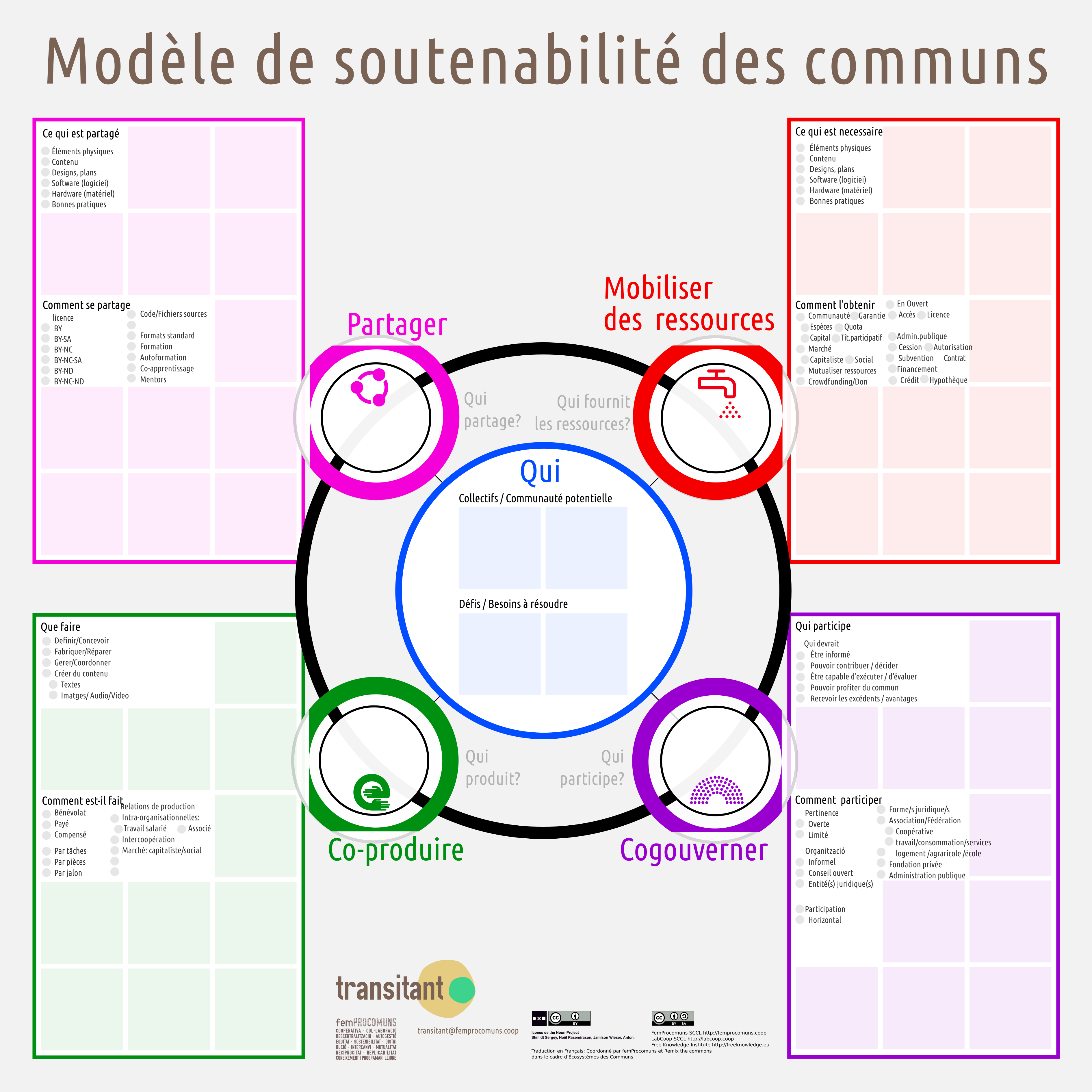