Five Pillar Model of the Commons 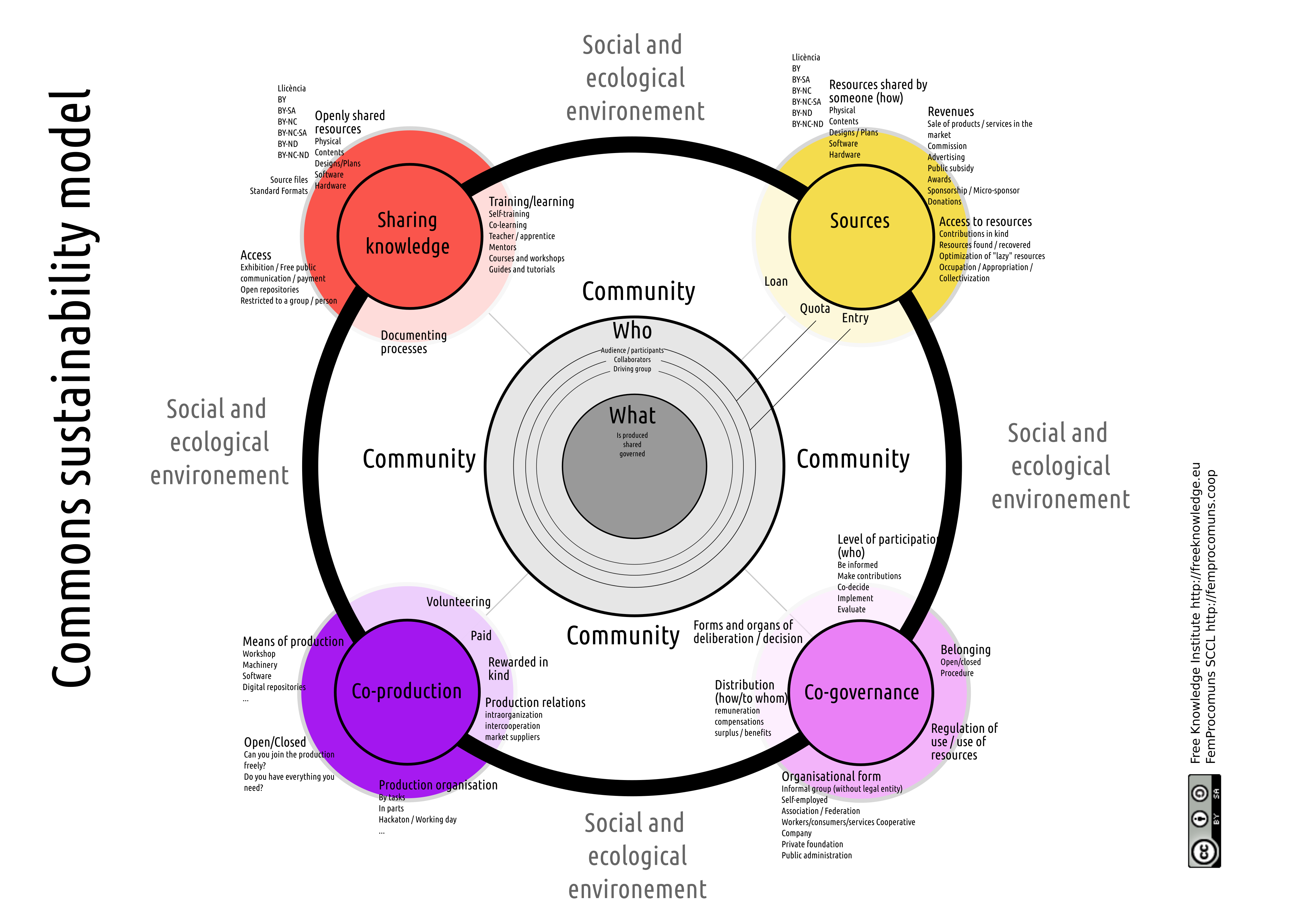 A sustainability model is a modeled definition of how a project works or proposes it to do. Key elements are the value proposition – products or services – what is being done, for which user profiles, how to generate revenue, the organisational and financing model and other elements aimed at the sustainability of the project.

In our environment, business models are predominantly focused on maximising private profits, but not all economic projects follow this logic. There are projects that generate value and profit but have been defined as non-profit, for example the renewable energy cooperative, Som Energia. There are also those that generate value, but it is not monetary or exchange value but use value, for example an encyclopedia such as Wikipedia. And others that have no source of revenue but generate value for their participants, such as the Citybik.es project. “Business” is a word that can be confusing in these contexts, the term “sustainability model” is more appropriate because it is a search for a model that allows carrying out the project activity and is sustainable over time for the people involved.

Rhishab Ghosh’s team with the FLOSS project (FLOSS is an acronym for Free Libre Open Source Software), did an in-depth study in 2001 on the sustainability models (they called them business models) in the field of Free Software.

Since 2001 Creative Commons has begun offering a simple and practical set of generic licenses, ranging from fully free and permissive (CC BY), to copyleft (CC BY-SA), to non-free with restrictions. for commercial use (CC NC) or the creation of derivative works (CC ND). Creative Commons licenses are considered “open licenses” because they “open” the paradigm of “all rights reserved” for everyone to use and make copies; offering all or some of the four freedoms (freedomdefined.org).

These licenses allow for the development of open business models, which encourage the sharing of knowledge under open licenses, from the free to the reserved. Paul Stacey and Sarah Pearson worked with Creative Commons to publish a crowdfunded e-book in 2015, “Made With Creative Commons – Open Business Models”, in which they defined five strategies for revenue: digital to physical, directly connected, matchmaking, value-added services and membership.

It is typical for projects to combine different methods, and for the sustainability model to go beyond revenue sharing and the use of knowledge sharing licenses. According to Alexander Osterwalder, a business model “describes the rational of how an organisation creates, delivers, and captures value in economic, social, cultural, and other contexts,” [Osterwalder, 2010], but there are other axes that complement a commons sustainability model.

Prof. Yochai Benkler of the Harvard Law School (Benkler 2002) coined the term “Commons-Based Peer Production, CBPP,” describing a new model of socio-economic production where a large number of people volunteer, usually on the Internet. These types of projects typically have less rigid and hierarchical structures than those based on conventional business models. Often – but not always – these projects work without the need for financial compensation to the contributors. Benkler distinguishes three models of economic production, intrafirm or internal production, market production and peer production (p2p).

Benkler ended up defining peer production (synthesised by the acronym “p2p”), after years of study in various Internet communities. He saw the blogosphere change the landscape of the media; how thousands of people voluntarily shared the computing power left over from their computers in the SETI@home research project; how volunteer people produced the GNU/Linux operating system and then Wikipedia. When the resulting resource (of p2p production) can be considered a (digital) commons, we can speak of commons-based peer production, or peer production of a communal resource. This production model has generated different production systems alternative to conventional models and can be considered a “third mode of production”, as Michel Bauwens (Bauwens 2006) calls it, which we can find in many Internet communities.

With the European research project P2Pvalue, 300 online communities were researched in different categories and sectors with about 150 indicators and variables to compare their operation and the phenomenon itself. Platform tools were studied to facilitate community, ownership regimes, and models of governance, revenue, licensing, etc.

All of these studies and reports have helped us define a framework for analysing open or shared sustainability models, to identify why and how a project can become sustainable. In some cases, having a model without economic compensation can make a project sustainable because it requires little monetary resources to support the operation. In other cases, the model contemplates the generation of income to pay workers (employees, freelancers, cooperatives or outsourced employees) who maintain the core of the operation. In each case, there seems to be a fragile balance between the motivations of the different participants: the challenge seems to lie in maximising the motivation of a sufficiently large and diverse group of people who contribute (in the p2p production model) to important parts of the project, with aligned policies on sharing knowledge and governance.

We have tested this framework for the creation and analysis of open business and commons sustainability models by reviewing sustainability models of the collaborative economy environment and digital commons platforms, in different workshops of the Digital DIY project and in programmes such as La Comunificadora, in collaboration with organisations and experts in the social and solidarity economy and the economy of the commons.

The five pillars of the Commons Sustainability Model 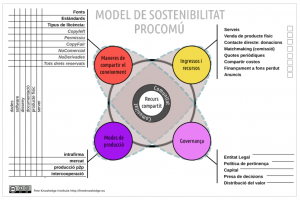 The type of projects we analyse are usually characterised by having a vision of social transformation and being defined by their mission. In this way they are different from conventional companies that sell products and / or services with the sole purpose, or the main objective, to maximise profit.

Commons projects also seek economic viability, and they do so primarily to drive their mission to meet social challenges through sharing. The benefits they can get is subordinate to the mission. This allows for a solid core of people who lead the project because they share the mission, and may want to contribute by providing resources only to make sure the project exists, without receiving direct economic benefits.

The commons, the rules, and the co-creator community at the center

The commons can be the good or service or the process of production of the good or service by a community that is articulated through mechanisms, tools and rules that allow it to regulate its own functioning. The community is made up of people with different profiles and roles: users, collaborators or promoters. At the same time, they are involved in the co-creation of the project through certain tools and methodologies – in particular,  Design Thinking and User Centred Design, as well as agile and lean startup methodologies.

Axis of revenue and mobilised resources / modes of production 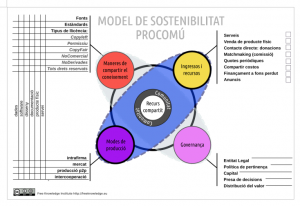 Figure 2. Balance between the pillars: “mode of production” and “revenue and resources”

We subdivide sustainability models into two groups: those that have market transactions (which can occur in the social market) and those that do not (or do not have them in their value generation kernel) and are based purely on voluntary contributions. The third model – the commons – has at the core of value generation the voluntary contribution of its members, in the sense that the acts are performed on their own will, regardless of the existence of direct or indirect economic compensation. There is a point of convergence between the Commons and the Social and Solidarity Economy, which combines the socialised market with the voluntary contributions of the Commons, as shown in Figure 3. 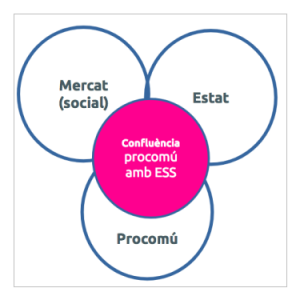 Figure 3. Convergence between the Commons and the ESS

After looking at many different cases, we can conclude that most combine multiple revenue strategies. Collaborative logic lowers the monetary costs of the project and, therefore, the tension generated around the search for revenue, in the feasibility plan. People are motivated to participate in the community and contribute with p2p work and donation strategies, especially when the lines are well aligned: when the knowledge sharing policy and governance model are in line with the vision and shared values ​​of the community.

Figure 4. Balance between pillars: “modes of knowledge sharing” and “governance”

The replicability of knowledge sharing is an element of pressure and guarantee of the model and good governance practices, the mechanisms for participation and decision-making.

Many of the cases we have studied apply a policy of sharing knowledge openly or freely, with public licenses based on the participants’ copyrights. This could be a threat that some competitor might replicate, or even the entire project, but at the same time can be considered a strength as community members may feel more motivated to contribute voluntarily knowing that nobody gets exclusive powers over their contributions.

When the process, tools and community results are well documented and licensed under a free license, everyone can have the same rights. And if it were ignored that the project’s proponents ignored a significant part of the community, which could be organized to create a fork, or project fork, it would generate a replication of the project under a new name. Generally, communities work hard to avoid these forks because they divide the community into two parts, and thus the team and contributors can be divided. This replicability aspect demands that the project drivers stay true to the mission and meet the needs of their community.

Therefore, to consider it a collaborative and open project, at least the freedom to share and to modify the generated knowledge (to open the rights of exploitation, communication and transformation of the work) must be given.

In practice, these policies cover at least three elements:

a) the public license that gives these permissions or rights to the community;

c) the use of open standard formats that allow interoperability between systems and objects.

How a commons-oriented community is governed is often based on complex rules. Especially because it is based on the idiosyncrasies of human relations and not just monetary transactions, this governance can be complex. We are interested in looking at key aspects such as the following:

Paul Stacey, Sarah Pearson (2013). What is an Open Business Model and How Can You Generate Revenue? https://medium.com/made-with-creative-commons/what-is-an-open-business-model-and-how-can-you-generate-revenue-5854d2659b15