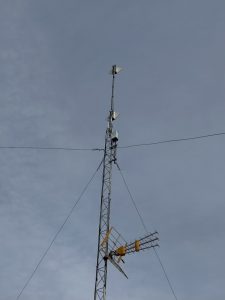 In the summer of 2015, 10 organisations installed LoRa radio technology gateways in Amsterdam, and linked them to a shared server to build a community network for sensors and actuators. They chose LoRa because at that time (and we can still say it is) the most open technology to building such a Long Range IoT network. With a manifesto that promises free, non-discriminatory access to everyone and the proposal to develop network software components under free software conditions, small groups began to pop up in hundreds of cities around the world, and they started to build their local community – so did we in Barcelona and other Catalan cities. By January 2020 we were already about 100,000 people in more than 700 cities, transmitting about 9 million messages daily.

Examples of use of the network

The network is used, among other things, to monitor the quality of air, water, energy consumption, of gas and water, for monitoring vehicles and other goods, for monitoring soil moisture and controlling precision irrigation, flood levels, animal location control, street light status or container occupancy level, bridge status, cold chain monitoring or as vehicle or people counters in public space.

We have been building the community for a few years now, doing workshops and obtaining support from partners, city councils, schools, research centers and other companies. The network’s driving team, in Barcelona, has joined the femProcomuns cooperative to cooperativise the network and facilitate its consolidation. Anyone can be a member of the TTN community on an individual basis, but we encourage individuals and organisations who want to get more involved in becoming a member of the co-op and make a regular voluntary contribution. This will give them a say and vote in governance, contribute to the sustainability of the project and allow for more professional deployments. In addition, as contributions grow, shared services such as NodeRed, ThingsBoard, Grafana, InfluxDB, Sentilo, Blynk, and other software members are interested in will be launched. 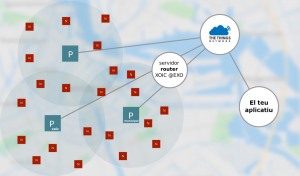 We can distinguish three types of gateways according to their ownership:

The first option is the most common in The Things Network (TTN) community: people and organisations purchase and place LoRaWAN gateways and point them to the nearest TTN server. Everyone is free to contribute to the larger network by adding gateways. Thus, dozens of people and organisations are contributing to expanding the network in Catalonia. This is the way TTN was started in Catalonia, and we continue to encourage people to add their gateways to the community network.

The second option, which began in 2018, is the collective purchase and deployment of gateways. This is how XOIC was launched, as a pilot program with the support of the Barcelona City Council and sponsor organisations. There are a dozen gateways purchased and installed for the sponsors, and which are managed by the XOIC, with the gateways owned by the cooperative. A number of gateways are now being added with the “adopt-a-gateway” program (read more here).

The third option is a gateway under contract. Different city councils have hired the XOIC to purchase and install gateways in their municipality so that their citizens have access to the open network. These gateways may be owned by local councils but are managed by the XOIC, to maintain and ensure their operation. The management is done by the XOIC and its team of local maintainers and collaborators.

The XOIC: commitment to collaborate with Guifi

Whenever possible we try to connect the XOIC gateways with the Guifi.net network. This community is a pioneer in building a community network and is the largest of the generic Internet networks. From the beginning, the Guifi.net Foundation has supported TTNCat and XOIC with resources such as servers and mailing lists, knowledge and its network. It is here that good locations have been used to place XOIC antennas on the same roofs that already have a Guifi node and so these gateways can be connected to the internet. And vice versa, the XOIC installations serve to strengthen the Guifi network wherever possible.

Thanks to its collaboration with EXO ( association for the Expansionof the Open Network) – a non-profit operator within Guifi.net – the XOIC has a server within the Guifi network where traffic is routed of these collective gateways and this allows for effective remote maintenance.

The XOIC: we bring the network server to Catalonia

So far the data is sent, always encrypted, to the European network server, located in Amsterdam. This is where users claim the data on their devices and decide to which application to send it.

It has been a while since we talk about deploying a server in Catalonia in order to decentralise the network and offer a better service in our territory. The LoRaWAN Network Server consists of different components that make up the LoRaWAN stack. There is the TTN stack that is free (under the MIT license). There are also other equally free alternatives that implement the same functionality.

We have gateways that allow data to be sent to more than one network server, which can be a solution to test and transition to the new server. Apart from XOIC’s collective gateways, the rest of the TTN gateway owners will be requested to point their data traffic to the local server. 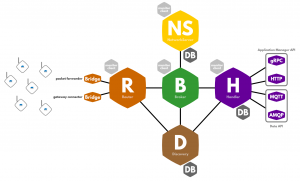 We need hands to deploy the network in different counties and municipalities, to train and learn ourselves, to develop use cases to solve social needs, to enjoy good network servers and applications.

If you want to know more, become co-owners, sponsors, clients or collaborators write to us at hola@xoic.coop and we will build this network together!