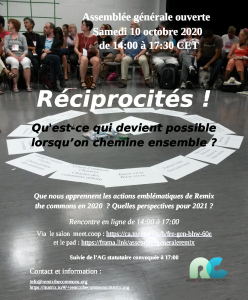 Remix the Commons, who we collaborate with on various projects, invite us to participate in their open General Assembly next Saturday, from 14:00 a 17: 00h. Meet.coop room: https://ca.meet.coop/b/fre-gen-bhw-60e and pad: https://frama.link/assembleegeneraleremix .

Remix is ​​an association that gives legal structure to the informal collective of activists and Francophone commoners, who for 10 years have been working together to learn about the commons movement around the world, to experiment with tools for the commons and to renew the conditions for the defense of the movement of the commons.

We have met Remix in various spaces and settings. We were invited to Convergence of media for the commons in Villarceaux, on 2017 to start looking for synergies with Teixidora and we continue to work on it. Later, we coincided at the First confluence meeting at the World Social Forum for the Transforamtive Economies in Barcelona, ​​in April 2019. And we’ve been building a stronger relationship since.

They encouraged us to participate and contribute to the organisation of the CommonsCamp de Marsella, in January 2020, with about 200 participants, 50 of whom came from ten different countries; we are participating in the launch of a European Commons mutual legal assistance laboratory, are now preparing to launch the Common Horizons initiative to collectively address strategic commons issues, and we participate together in propelling the video-conference tool meet.coop.

At Remix they have a horizontal organisation and governance (now, formally they are an association), and they function as a commons with a Governance Charter that defines their values ​​and operating rules, which are discussed regularly and will be reviewed in the General Assembly on Saturday.

As a preamble to their assembly, they share a reflection in the form of a hypothesis on the commons movement and invite us to make comments and criticisms, which may inform the debates of the Assembly.

Access to the text (in French):  : Where does the name of the commons movement come from??

More information about the assembly: here.