This participation is part of the new edition of the Ateneus Cooperatius de Catalunya network project, promoted by the Department of Labour and Enterprise of the Generalitat de Catalunya. It is a triennial edition, this call is until 2025, and we are particularly excited because it will coincide with the 125th anniversary of the 1a assembly of Catalan cooperatives that was held at La Bienhechora in Badalona. We will draw inspiration from historical cooperativism to strengthen the cooperative economy of the present and the future.

In this edition, six specific services are agreed upon, a transition towards the use of techno-ethical work tools begins, and the Ateneu grows in the field of culture, with a specific cooperative circle of the Cultural Industry that will be coordinated by El Círcol de Badalona.

From femProcomuns we are in charge of the migration of AteneuBNord’s digital tools to free and technoetic software. We are already using CommonsCloud videoconferencing tools (bigbluebutton) for meetings and trainings, as well as an Advanced Office (Nextcloud) to share files, share calendars, create formulaires, organise tasks and communicate internally. CommonsCloud mail (Zimbra) is also being used for emails and mailing lists. Moreover, we participate in the communication commission, we are in charge of the compilation of good practices, and we participate in training, workshops and other activities. 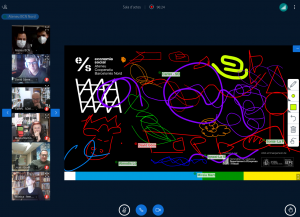 Last January, the assembly was constituted to ensure the good governance and functioning of the Ateneu Cooperatiu, which, initially, in addition to the promoting organisations, will be made up of the Associació per la Inserció Social i Laboral (ISIL), Fundació Tallers, L’Obrador de Gramenet SCCL, Som Mobilitat SCCL (local group Badalona), Gramagraf SCCL, Ambici SCCL, La Page Original, Fundació ECOM, Tallers Guinardó SCCL, Observatori de la Moneda Complementària SCCL. A list of organisations that is open to new members, among the organisations that make up the cooperative and solidarity economy fabric of Barcelonès Nord.

In Catalonia there are 14 cooperative athenaeums, distributed throughout the territory and managed jointly by cooperatives, solidarity economy organisations and/or town councils, with the support of the Catalan government’s Department of Employment, which, among other services, promote and support the creation of new cooperatives.