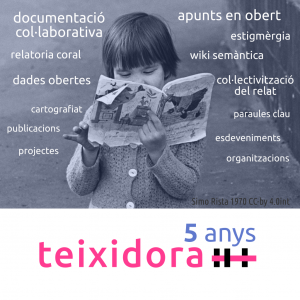 On 16 February 2016, 5 years ago, we launched Teixidora.net. In the last 5 years we have collected more than 480 sessions of events. They have their notes, and are interconnected by keywords, organisations, projects, people and publications mentioned. In the last year we have been working to improve Teixidora, to make it easier to use and to improve the quality of contents and connections between them.

With Teixidora we want to contribute to extend the practice of open collaborative documentation. Therefore, the platform is available to anyone who wants to use it, both to contribute with content and to reuse it.

From very early on, Teixidora had the support of wikis.cc, which has provided hosting. It has also been very important to be able to count on a stable pad system such as those provided by La Mar de Bits. Since 2018, the project has been driven by the Teixidora Cooperativised Activity Group of the integral cooperative femProcomuns. In the last year the group has pushed a programme of platform improvements and exploration of interoperability with other projects, cooperating mainly with Col-lectivaT cooperative and Remix the Commons teams. We have dedicated our own resources and have also had the support of the Culture Solidarity Fund (Culture of Solidarity Fund), a grant from the European Cultural Foundation (ECF).

What we have done this year

When an event we want to document on Teixidora has multiple sessions (such as a conference, a congress, a course, etc.), we have to create a general page for the event and then a page for each session. Apart from these pages, you also need a pad for each of the sessions (with a structure you will use for that event). We have simplified this process by automating some parts. We start with a spreadsheet where we put a list of the sessions with their data (day, time, speakers, language, broadcasting channel, etc.). This is the usual spreadsheet, updated during the preparation period of an event.

We convert the spreadsheet into a comma separated document (CSV format) and we then import it from a Teixidora formulaire. In this formulaire we choose the structure we want to give to the pads. Collecting notes in a structured way is a key factor for the collaborative documentation to be interconnected later on. But not all events are the same and we are not always interested in collecting the same information. We tend to always collect keywords that help to know what the event was about. We also collect what was mentioned: organisations, projects, publications and sometimes also people (activists, authors, politicians,…). If the event focuses on the diagnosis of an issue, you may want to collect challenges and opportunities, or pros and cons. If it is part of a participatory process, you may want to collect proposals or identify existing alternatives. If it is a deliberative and decision-making, you may want to collect agreements and pending issues.If it is a reflective and thought-provoking talk, you may want to collect questions that are left open or highlight some phrases, quoting what has been said. The note-taking team should decide this with the event organisers and/or participants and choose on the formulaire. Once done and saved, the general page of the event is created and a “Bot” (automatic programme) is in charge of creating a page in Teixidora for each session of the spreadsheet and a collaborative editing pad for each of the sessions. All these pads are automatically created with the chosen structure and are linked in Teixidora. 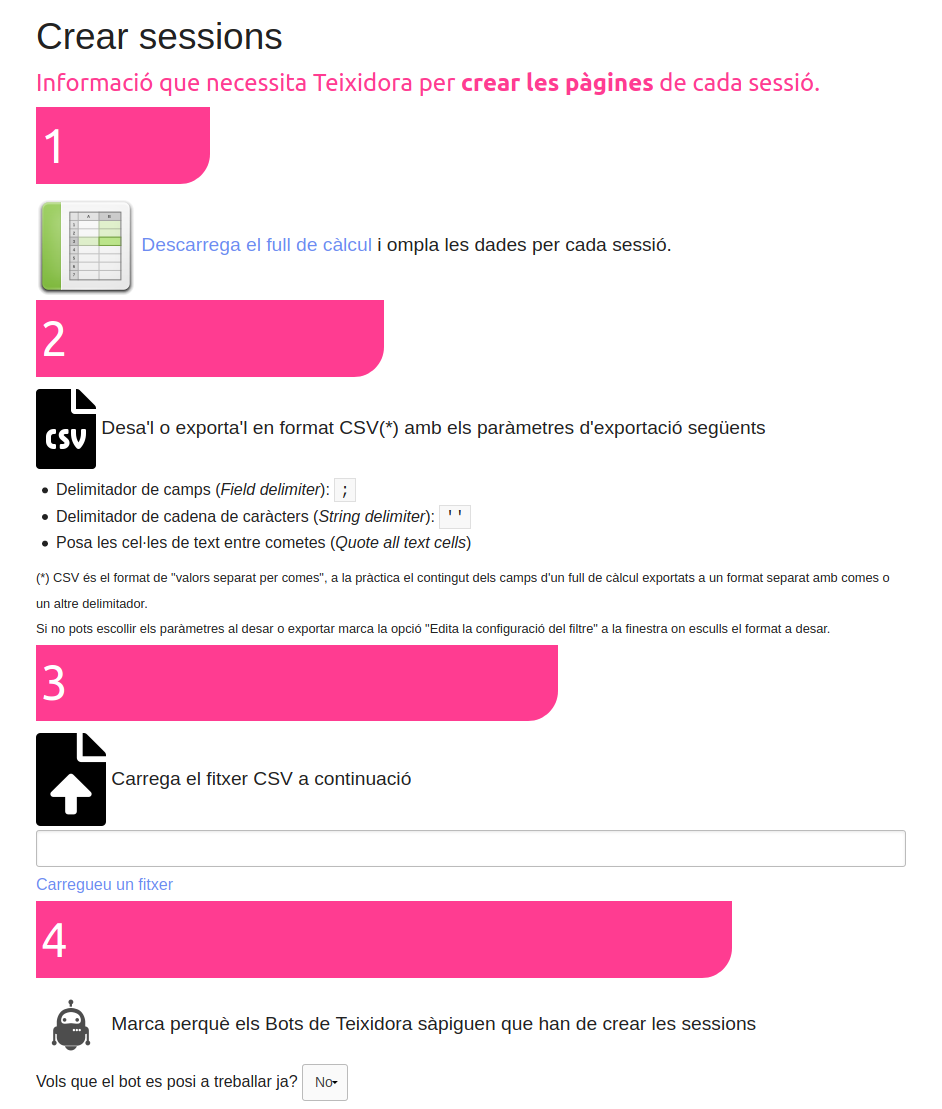 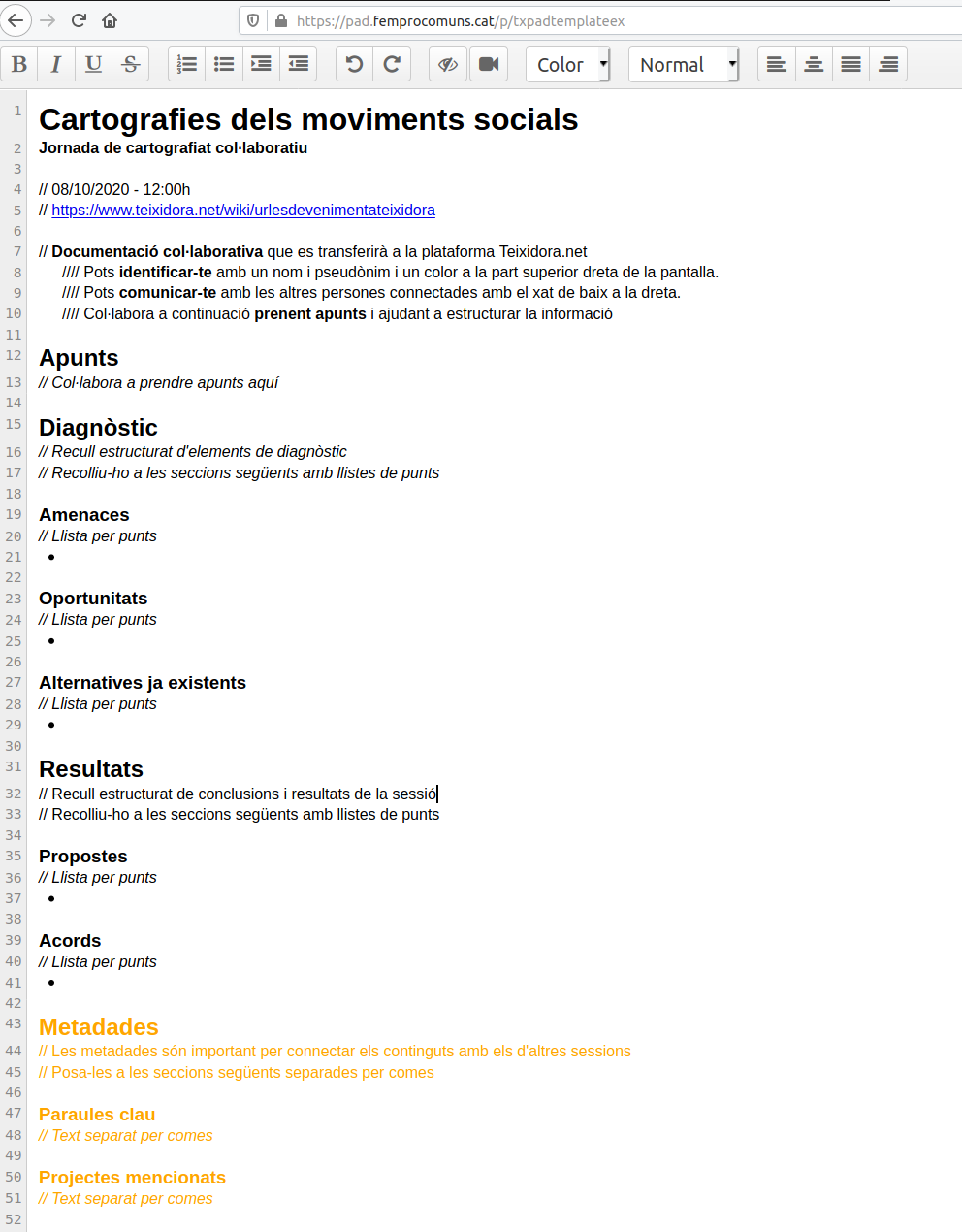 Import of notes and proofreader

Teixidora has a Bot, since 2017, that imports the content of a pad (where notes have been taken) respecting the format of the text (it does the conversion) and detecting sections of the pad that correspond to a parameter of Teixidora pages templates-file. If it detects a section, it extracts that content and, instead of leaving it on the notes, it moves it to the right place. A clear example is keywords. If it detects a section in the pad called “topic” it takes the content separately and those words that we have writton on the pad become links to the rest of Teixidora’s contents that have the same keyword. And the same with, for example, projects and organisations mentioned. Following this process we have been detecting possible improvements for the Import Bot, which we have implemented this year. 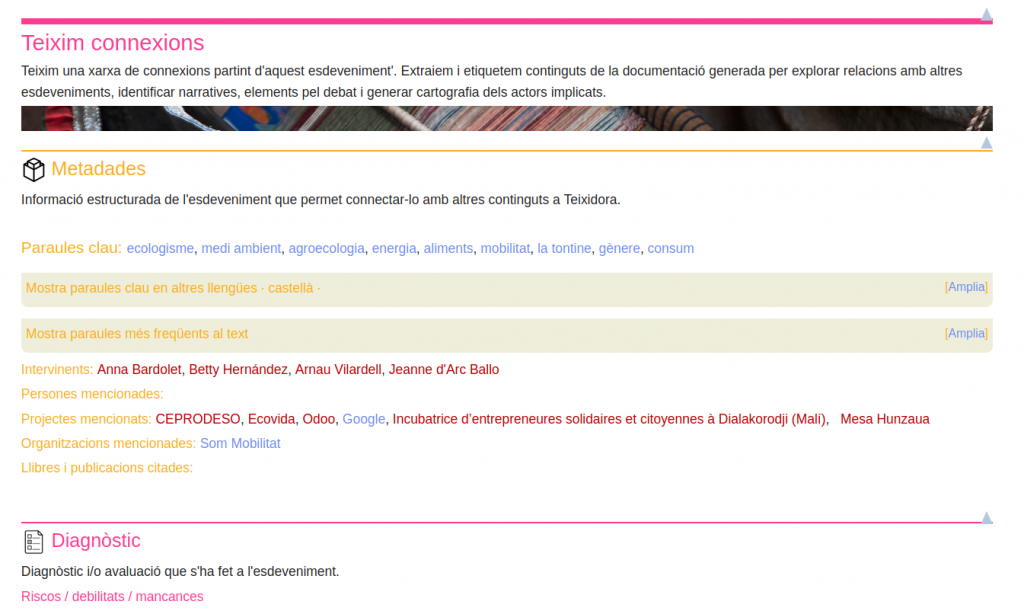 On the other hand, when taking notes, typos and spelling mistakes are often made. Having the text in a digital platform allows to run an automatic corrector and the fact that the platform is a collaborative wiki allows to combine it with human editing. Working with Col·lectivaT we have incorporated a multilingual proofreader (Teixidora accumulates notes, mainly in Catalan, Spanish, French and English). When we want the proofreader to go through it, we mark it on the page of the corresponding session, the proofreader generates a “corrected page” and marks it so that it can be checked by a human. Once checked, the corrected text replaces the imported text. We have started to “comb” the accumulated contents by running the corrector and doing the revision (if you want to help us with this task, contact us). 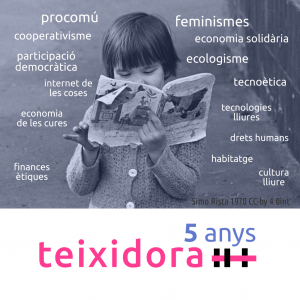 This year we have opened two TeixiRepte (challenge) pages that facilitate collaboration to complete contents that do not exist in Teixidora, but that should exist, given that they have been mentioned in some event. The semantic wiki allows us to discover what has been mentioned (organisation, project, person, publication) and should have a page. This is shown on the TeixiRepte page to make it easy to create them. We have TeixiRepte femBlaus (blue) which is more exhaustive, about all the contents mentioned, and a more specific TeixiRepte dedicated to feminist topics called femLiles (violet).

Thinking about the people who use Teixidora as a consulting tool, when we see there is already relevant content on a topic, we create “threads” with semantic queries that group content on this topic. We already had the threads “political participation“, “gender and technology“, “internet of things” and “MWC and alternatives“. We have added a new thread for “feminisms” and another one on “COVID19“.

We have also been collaborating for some time with the French-speaking organisation Remix the Commons, which also has a semantic wiki where it documents experiences, initiatives and concepts, especially around the commons and related practices. There are similarities and differences between the two wikis that we have studied and we have been working together to make, for example, the content structure for documenting “projects” similar on both wikis and to create a new type of page in Teixidora for documenting “concepts” based on Remix the Commons wiki concepts page. This year we have coincided with Remix the Commons (and with other organisations and people) in the organisation and participation in Commons Camp in Marseille, in the commons movement at World Social Forum on Transformative Economies, as well as in the implementation of Common Horizons process. We have documented the encounters related to these processes and events in Teixidora, tested ways of taking simultaneous notes in multiple languages (with and without the support of professional simultaneous interpretation) and discussed ways of collecting and structuring information.

What else have we done and what are we doing?

It has been a very active year. We have made several improvements to the interface and the structure of Teixidora pages (events, publications and projects, among others), as well as to the forms; adding keywords and descriptions to the pages in languages other than Catalan; and we have created new categories to help locate pages according to the content of the documentation they contain. We have also created a “Teixidora contrast” group with people who know the project and with whom we consult and contrast some decisions about where the platform should be headed. We have also started to do some other developements we are still working on:

What can you do with Teixidora? 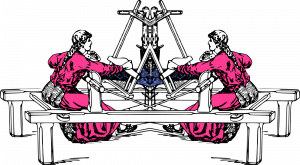 If you organise conferences, meetings, talks, trainings or any other type of event and you want to document them collaboratively and share the contents openly.

If you produce journalistic, academic, training or other types of content and if you work with open data

If you promote a similar or complementary project

Event notes and documentation kept in Teixidora are in several languages, the platform is incorporating multilingual language technologies. Currently most of the interface and documentation is still in Catalan; we are working to support more languages but we need to first update the main software and several extensions. We want to work with other territorially and linguistically located projects to facilitate interoperability and collaboration between similar platforms.