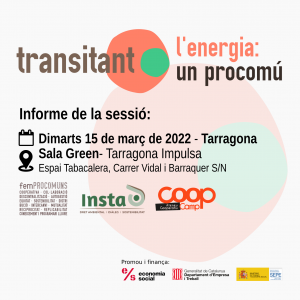 In the open work session, held in Tarragona, on March 15, 2022, in the morning, we saw the role of energy as a commons and, specifically, we looked at the figure of the Local Energy Communities (LECs). We organized the session together with INSTA and CoopCamp, we also wrote a report with them (which you can download – only in Catalan) to start reflecting together on the subject, to collect the work done that day and share it, with the aim of serving as a starting point to continue deepening in the reflection.

Energy is a key element of any social organisation. How it is produced, transported, transformed and used contributes to shaping society and its relationship with the natural environment. Mercantilist, oligopolistic ways of organisation guided by the maximization of private profit from energy has had serious consequences for ecological and human sustainability, while it has stripped local communities of the ability to decide autonomously how they organise their productive activity and reproductive health, and to control and dispose of the essential resources for life. Understanding energy as a commons places it outside commercial logic, makes us think about who needs it and who uses it, as people with the capacity to self-organize collectively to meet our needs in a responsible and sustainable manner. 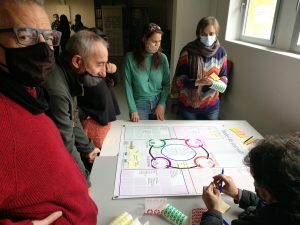 We took each of the pillars of the Commons sustainability model into consideration, and we saw that the LECs open up as an opportunity to change the traditional functioning of the energy model, allowing citizen empowerment. There is a strong interest and willingness to get involved in the construction of energy communities in Catalonia, probably because as a community, we feel we are affected by the climate emergency, the energy emergency and the macro-projects with a strong socio-environmental impact, and we want to be part of the solution. If these communities become cooperatives or associations, based on energy sovereignty criteria, then we will be able to build a democratic governance and become a lever for transforming the current model.

It is foreseeable that this empowerment won’t happen just in the sphere of energy generation, but rather that it can affect the entire system. This leads us to think that we have to take advantage of the LECs to implement structural changes.

The session also highlighted the need for hybridization between different actors, as well as with other transforming movements such as the local groups from Som Energia or other cooperative projects, neighbourhood associations, environmentalists, etc. And we concluded that it is difficult to analyse the LECs unrelated to their environment, because the reality is all communities now being created have a substrate without which they could not exist.