The Taula d’Entitats del Tercer Sector Social de Catalunya (the institution representing all Catalan social organisations) has published the study “Internet, fundamental right: proposals to reduce the digital and social divide” (in Catalan “Internet, dret fonamental: propostes per reduir la bretxa digital i social“) which was jointly written by the Observatori DESCandfemProcomuns. The study was presented last September 29th in a conference at Casa Macaya (Barcelona). The report analyses the existing legal framework (both in the Catalan and Spanish sphere and in the European and international sphere); makes some considerations on the content of the right (dignified, equal and empowering access; exercise of rights and freedoms) and exposes the existing positions in relation to its recognition (as a means to exercise other rights, as an instrumental right, as a substantive right). It studies the case of Barcelona; and finally presents some conclusions and makes some recommendations for action in three axes: actions to strengthen the legal framework, public policies, actions to be undertaken from the third sector.

The second part of the study reflects on the content of the right to the Internet. In order to recognise the right to the Internet as a fundamental right, it is necessary to identify the main aspects that need to be protected. For this reason, this second part of the study sets out the different areas of the right, and raises three possibilities in relation to its recognition:

The third part describes the initiatives that have been taken in Barcelona as a case study, both at the institutional level and from the citizenry, as well as the opportunities and shortcomings for the exercise of the right to the internet in the city and the impact of the internet on the exercise of other rights.

To write the report, the study of existing legislation and bibliography was combined with the following group and personal interviews:

The conclusions -based on the observation that the level of vulnerability that can be caused by the lack of guarantee of certain rights due to not having a device, a connection or the capacity to exercise a range of rights that are impossible to measure, and which are currently articulated through the network-, take us to consider the Internet as a new fundamental right (the option chosen by the Bureau) and leaves open the debate whether it should be considered instrumental or substantive. It is also concluded that the difficulty this recognition may entail means for political advocacy to achieve it to be parallel to ensuring the existing legal framework includes measures that generate obligations for public administrations and companies to allow the right to be exercised. In this sense, the role civil society can play in order not to leave the guarantee of the right exclusively in the hands of the State, the companies and the market is emphasised, ensuring the social perspective of its protection. On the other hand, it is indicated that the right of use can never become an obligation of use. Under no circumstances can discrimination in the exercise of rights and freedoms be created by not having or not wanting to have access to the Internet.

These conclusions come with a series of recommendations for action: 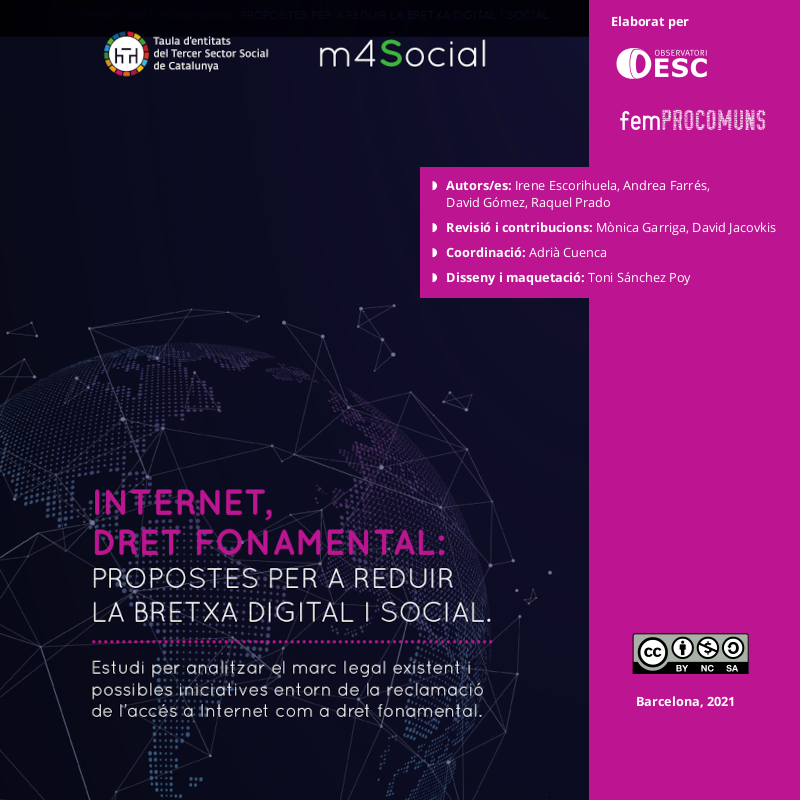