On 29 June, the day of Sant Pere, we held our Ordinary General Assembly 2021.

We would like to highlight:
– The space for dialogue – a new space within the assembly to know the opinion of the members on the strategic lines of femProcomuns.
– The approval of the 2020 accounts with a positive balance, for the third year since the beginning of our activity, and despite the COVID-19 Crisis.
– A budget for 2021 with 3 scenarios.

The assembly was exclusively online, for the second time, given COVID-19’s situation. The methodology used had been designed and tested in the support that we have given to several cooperatives who asked us in recent months, for support on their general assemblies, and also through Cercles.coop. 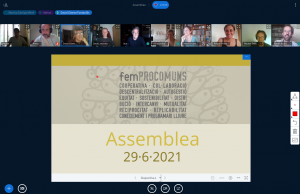 We approved the minutes of the previous General Assembly and ratified the agreements taken at the Trunk Assembly, the permanent assembly which -over Loomio platform- takes the necessary decisions between assemblies and which aims to give agility and strategic focus to the cooperative. This year, we also ratified the incorporation of a new worker member, David Jacovkis, the change of membership typology of Wouter Tebbens, who became a collaborator member, and the incorporation of 26 new individual user members and 20 new user member entities (during 2020 and the first half of 2021). With the new additions, on the day of the General Assembly, femProcomuns cooperative was made up of a total of 3 worker members, 12 collaborator members and 58 user members.

.
We explained how we tackled the Covid crisis by changing the order of our priorities.

We worked first to strengthen the working team and the cooperative. Took the 1st Course on Platform Cooperativism (Mondragon and New School), a Course on Data Protection (Bar Association) and also participated in Learning To Grow Coop (FCTC), with tutoring from LTG (Jaume Oller) and the FCTC sponsorship programme (with Albert Huerta).

Then we focused on growing the social mass. Whereas this time last year we had 4 member entities, now we have 20. 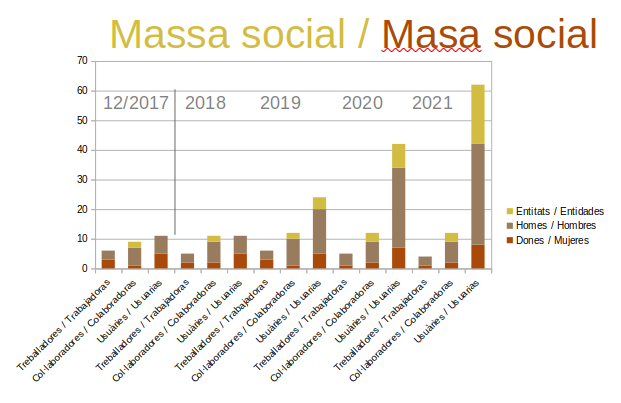 We have continued to work through GACs (Grups of Coooperativised Activity).

GAC Transitant – We have continued to implement La Comunificadora programme, deepening the methodologies and the 5 pillars model. We have created a training catalogue and we have networked, internationally.
GAC Teixidora – We have turned 4 years-old, we have focused on development and improvements, getting closer to other sister projects.
GAC CommonsCloud – We have sustained the project and services, established intercooperation agreements, grown in the number of partner entities, sought funding, participated in the creation of Meet.coop, done advertising, server changes…
GAC XOIC – We have given continuity to the Open Internet of Things Network (with deployment and workshops).

.
The results for 2020 are positive, we have had an accounting result of 9.591,59 € (before tax) thus are able to contribute to the cooperative funds. We closed the year with a higher surplus than in the previous year, which is used to endow the Obligatory Reserve Fund (FRO), the Cooperative Education and Promotion Fund (FEPC)-with which we pay the costs of affiliation to second-tier organisations-, and the Mutual Fund that we created at last year’s assembly, to which we allocate all the obligatory contributions made by worker members (€1,155). The remainder, according to the statutes, endows the Collective Commons Fund.

62% of the revenue is provided by GAC Transitant and 23% by Teixidora. 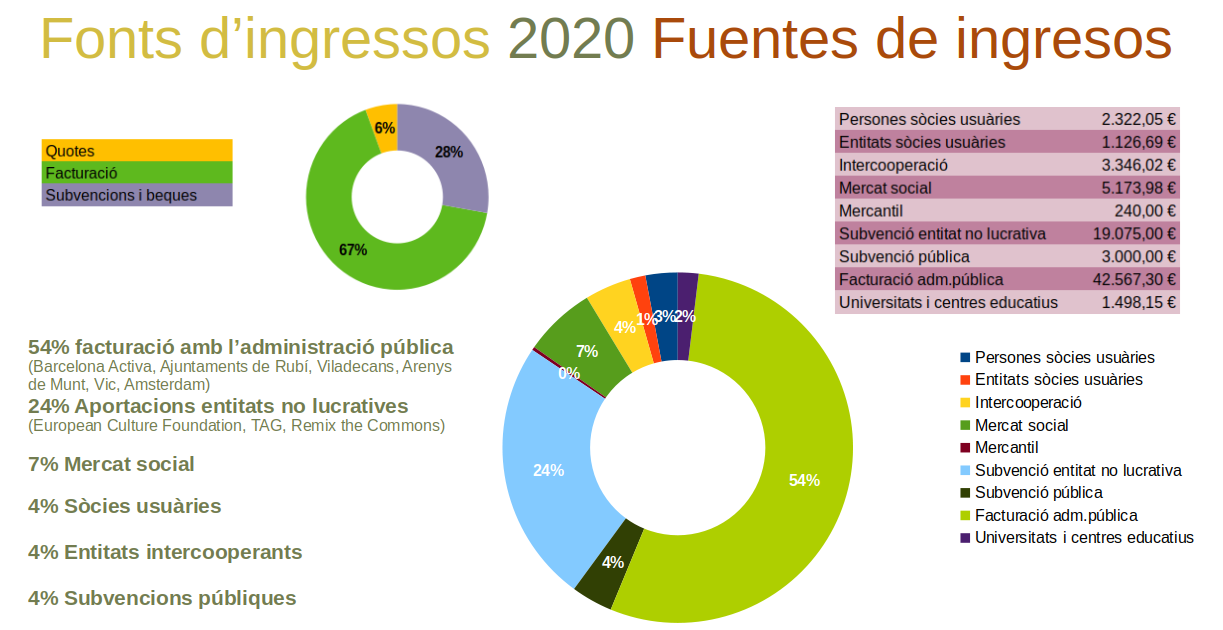 The expenses are 55% labour (this year we have stabilised salaries around 1,5 the SMI), 22% in the solidarity economy (12% to the social market and 10% in intercooperanting entities) and 14% in commercial companies (mainly servers for CommonsCloud and XOIC materials and services).

A budget with 3 income and expenditure scenarios is put to a vote:
– Sustain the structure – This is to match 2019 revenue, and we already count as of June 2021 with 82% of the projected revenue, sustain the 3 current salaries and not exceed 30% in non-labour expenditure the rest of the year.
– Grow – We are committed to adding one more salary and/or improving them and foresee 50% of non-labour expenditure, mainly in inter-cooperation projects.
– Stabilise – We seek to grow, expanding the team, services and projects and obtaining around 60% more income than we have earned up to June, intercooperating with other entities.

This budget, with the general purpose of femProcomuns to be a strategic tool to make the commons activity viable and according to the 5 years vision we are working on, has to allow:
– Strengthen links and intercooperate in a stable way with other entities/collectives in a commons and open cooperativism system.
– An articulated combination of different degrees and forms of participation in governance.
– Having a stable and cohesive team of working partners, having consolidated the GACs and having the capacity to respond and adapt.

To achieve this, 6 strategic lines that we have already begun to worked on, in the first half of 2021 and which we discussedin the Dialogue Space have been voted on and approved in the assembly: 1.
1. Consolidate a team of working partners.
2. To stabilise ourselves economically, to gain autonomy and solvency.
3. Significantly increase the social mass of people and user partners, increase diversity and reduce gender imbalance.
4. Improve internal organisation and work processes
5. Progress in the degree of participation of user members.
6. Consolidate the current GACs and projects.

In order to find out the opinion of the members on the strategic lines, we created a “Dialogue Space”.

We found that in general, participants are comfortable looking for ways to stabilise ourselves financially and gain autonomy and solvency, through credit, equity or voluntary capital contributions. We measured the willingness to contribute to increasing the social mass, for example through word-of-mouth campaigns. We found that they view positively the proposal to offer a free email account as a strategy. And we found that there is no consensus on the ways to increase the level of participation of users. Our Irregular newsletters, spaces in the Agora and the Dialogue Space itself are insufficient, but what would be the way to make members feel that their participation is valuable? 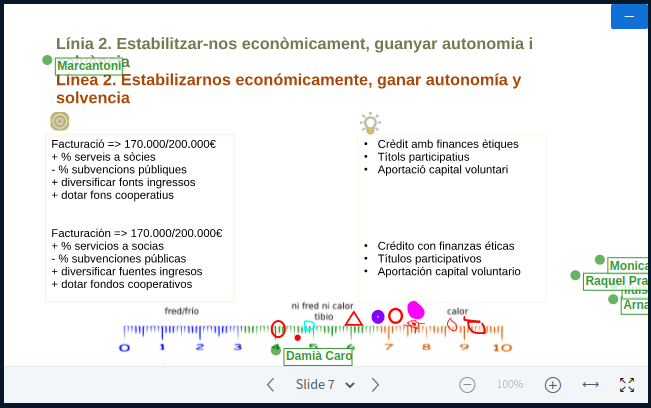 These are just some of the questions we asked ourselves, we are working on the answers through a survey that we have circulated among the members in order to deepen the work we have started.

Thanks to the members and guests who participated in the assembly! We are starting to become a good number of people, very diverse and with different motives and interests, and only by talking among us, we can get to understand each other and make this cooperative project grow!